The offshore Block 50 concession in Oman is a key asset of the Group. The Group successfully achieved first oil in Yumna 1 in February 2020. The approval of the Field Development Plan for the Yumna Field and the award of Declaration of Commerciality ("DOC") were obtained on 12 July 2020. As of 31 December 2021, the Yumna Field had produced 5.772 MMstb of oil. 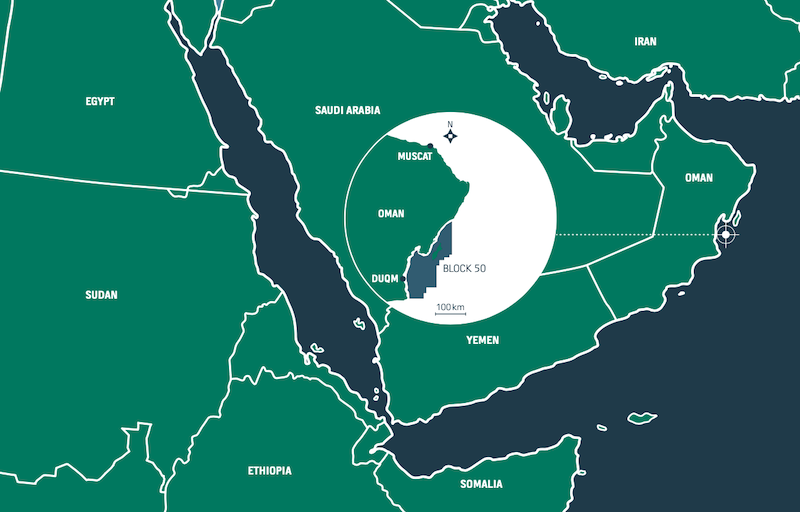 Block 50's position in East Coast Oman can be seen from the map above.

Yumna 2 commenced production on 23 January 2021 while Yumna 3 commenced production on 18 February 2021. In mid-March 2021, the Yumna Field process facilities were upgraded and the liquid handling capacity on the Mobile Offshore Production Unit (MOPU) was increased. The production rate is being regularly optimised to maximise recovery from the field. The Group's vision is to establish viable long-term production and substantially increase the oil reserves in Block 50.

On 4 February 2014, an oil discovery called GA South (subsequently renamed Yumna) was announced in Block 50. During a 48-hour test, hydrocarbons were flowed to the surface and the well achieved a flow rate of 3,500 stock tank barrels per day of light oil with no water production. The discovery is significant as it is the first offshore discovery east of Oman after 30 years of exploration activity in the area. The discovery won the "Offshore Discovery of the Year" award in Oman.

In early-November 2019, a drilling rig contract was awarded to drill an appraisal well in Block 50 Oman. By the end of the month, a floating storage and offloading vessel contract for an Aframax tanker with a storage capacity of more than 700,000 barrels was awarded, to store crude oil that would be produced during the early appraisal phase of the Yumna (previously known as GA South) field. On 26 December 2019, the Yumna 1 well was spudded. The well came in as prognosed and confirmed the updated reservoir model. The well tested at a production rate of 11,843 stb/d through a one-inch choke with a crude oil gravity of 42 degrees API.

In April 2021, Masirah Oil announced that following the successful drilling of two Yumna Field development wells, it has completed drilling three exploration prospects that were located near to the Yumna Field, offshore in the Arabian Sea – Zakhera, Yumna East and Yumna North. The results confirmed the extents of the good quality Lower Aruma sandstone and will help refine MOL’s understanding of the trap mechanisms in the area.